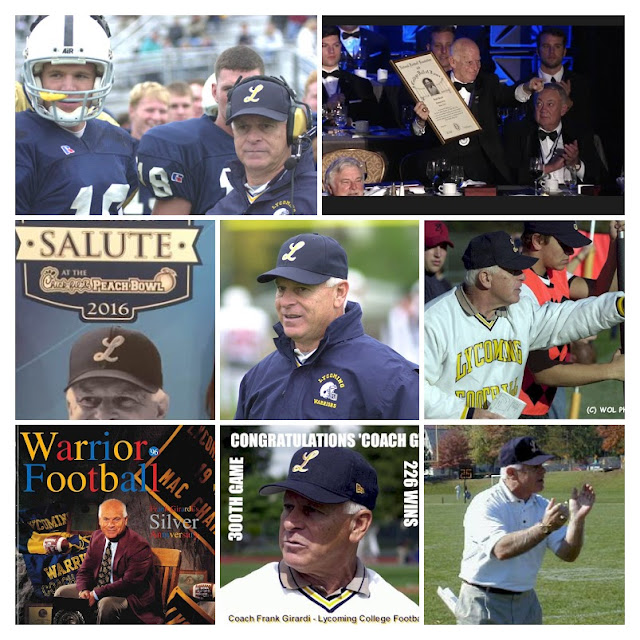 Congratulations Coach "G" as you are honored at the Peach Bowl Saturday, December 31st! We are so proud of you and the recognition you truly deserve. You invented a winning coaching approach at Lycoming by creating a family atmosphere. You started a culture of being involved with players and their families! You cannot fake this attitude. You either have it or you are shallow as a coach. Thanks again for all the lessons demonstrated by you, Lynne, and your extended family! #GoWarriors
Posted by JGREEN45 at 12:10 PM No comments:

NEW YORK – Former Lycoming College head football coach Frank Girardi joined an elite group in the College Football Hall of Fame on Tuesday night, Dec. 6, as part of the National Football Foundation’s Annual Awards Dinner at the Waldorf-Astoria, adding to an already legendary resume, as NFF chairman Archie Manning officially recognized Girardi as one in a 16-member class.
Read more »
Posted by JGREEN45 at 9:38 AM No comments:

NEW YORK, N.Y. – Former Lycoming College head football coach Frank Girardi spoke at the National Football Foundation’s Annual Awards Dinner Press Conference ahead of his induction into the College Football Hall of Fame tonight, Dec. 6, at 8 p.m., at the Waldorf-Astoria, as part of the NFF’s Annual Awards Dinner. The awards dinner will be broadcast on ESPN3.

Below are Coach Girardi’s comments at the press conference, provided by Caption Northwest, Inc.

BONNIE BERNSTEIN: Frank Girardi, 1972-2007 at Lycoming, 257 victories, won 72 percent of his games, one of only 17 coaches on any level -- any level -- to reach 250 wins at one school. Coach, Coach Bowes was talking about the importance of having an eye for talent, hiring coaches around who can complement you. But you think about that: 250 wins at one school, 29 straight winning seasons. What's the formula? What really worked? If you had a bunch of young, aspiring coaches sitting here in front of you, what would you -- how would you guide them?

This is the video that was played at the 2016 National Football Foundation Awards Dinner before Coach Frank Girardi was inducted into the College Football Hall of Fame.

Hall of Fame coach Frank Girardi honored with a Medallion on the City of Williamsport's Sports Walk. The recognition of this great coach keeps coming in.
Posted by JGREEN45 at 9:57 AM No comments: