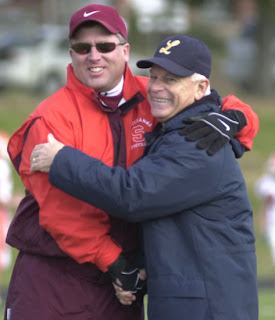 
The victory was special for Coach Girardi in a number of ways. His family was on hand to witness the 34-year mentor become only the 17th coach in any NCAA football division and only one of five active coaches with 250 career wins. It is also fitting that this victory comes against Susquehanna. In 1972, following a 0-5 start, Coach Girardi notched his first victory in a 16-12 decision against the Crusaders.

In a season that many call one of his best coaching performances of his career, Coach Girardi made a bold move with 0:51 remaining in regulation when he called on freshman kicker Mike Monastra (Havertown, Pa./Haverford) on fourth down from the 10-yard line with the Warriors down 10-7. Monastra, having made only one field goal on the season of 19 yards, split the uprights on a 27-yard field goal like a hardened veteran to force the overtime period.
With the offense sputtering for the majority of the match, the Warrior defense responded with its most dominating performance of the season. The unit surrendered only 146 yards of total offense including a dominating push against the Crusader rushing attack in giving up only 53 yards on the ground on 41 carries. Lycoming also battered Susquehanna quarterback Dennis Robertson with a trio of sacks and three first-half interceptions.

One of those interceptions set up the opening score of the game. Defensive back Vreeland Wood (Hamburg, Pa./Hamburg) corralled an errant Robertson throw at midfield. Freshman tailback Jim Laky (North Wales, Pa./North Penn) took a toss around the right tackle from four yards out a few plays later for his fourth rushing score of the season and 7-0 Warrior advantage.

Smith was sacked a pair of times on Lycoming's next drive and was Lycoming was forced to punt, but the Warriors got the ball right back as Crusader return man Ben Gibboney had the ball jarred free by senior Matt Mangold (Marlton, N.J./Cherokee). Fellow senior Mike Ward (Phoenix, Md./Loyola Blakefield) collected the loose ball to give Lycoming possession at its own 38-yard line.
The Warriors converted on fourth-and-inches from the Crusader 38 on a sneak by Smith, but on fourth-and-10 from the Susquehanna 20-yard line, Lycoming eventually turned the ball over on downs.

Susquehanna added a field goal on the first drive of the second half. A 15-yard completion to Nick Macia and a pass interference penalty set up a field goal try for the Crusaders. Kicker Dwith Swaney made no mistake in converting the 26-yard attempt and giving Susquehanna a 10-7 edge.

The Warrior defense stepped its play up yet another notched with a pair of sacks by defensive end Tim Hartingh (Willow Grove, Pa./Upper Moreland) and linebacker Kevin LeSage (Darby, Pa./Monsignor Bonner) on the same series of downs to pin the Crusaders at their own eight-yard line. Susquehanna averted a near disaster when the punt-snap eluded Swaney�s grasp, but the left-footed kicker scrambled after the ball, collected it, and managed to boot the ball downfield. It nearly worked in his favor as the effort careened of a Lycoming lineman, but return man Nate Hanner (Montoursville, Pa./Montoursville) collected the bounding pigskin.

The Warriors squandered the good field position that resulted from the play when Smith was intercepted by Rob Hauke with a little over three minutes left in the third quarter.

Both defenses played top-notch ball in the fourth quarter with the Warriors surviving three possessions from inside their own 20-yard line. Punter Tim Eskridge (Havertown, Pa./Haverford) relieved the pressure for Lycoming with a 52-yard kick that was downed at the Crusader three-yard line.

Lycoming forced Susquehanna into a three-and-out punting situation and seemed destined for good field position, but an illegal block penalty during Swaney�s kicked back the Warriors to their own 47-yard line.

Smith stepped up in the passing game with a pair of completions to receiver Jeremy Ebert (Hawley, Pa./Honesdale) sandwiched in between several effective runs by Laky and running backs Brandon Traugh (Catawissa, Pa./Southern Columbia) and John Seese (Stroudsburg, Pa./Stroudsburg). Monastra capped the effort with his big 27-yard field goal.

Lycoming and Smith captured the game in the first overtime frame with his 11-yard scoring run backed by a four-play stop by the Warriors' defense.
Smith finished with a game high 83-yards rushing and a score while throwing for 116-yards. Laky rushed for 67 yards and a score on 21 carries. Defensive tackle Mike Kozak (Drexel Hill, Pa./Monsignor Bonner) led the defensive with 13 stops while linebacker Luke Sterling (Lehighton, Pa./Lehighton Area) added 11 tackles.

All of Saturday's action will be replayed on television via Suscom Channel 2 twice this week. Catch the Warriors as the second game of a double-header on Sunday, November 13, at 1:00 p.m. The game will also be televised on Tuesday, November 15, at 7:00 p.m. Listen to Gary Chrisman and Babe Mayer call all the Warrior winning football action.
Posted by JGREEN45 at 10:16 AM