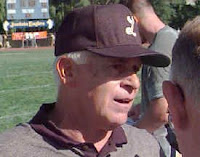 Tri-State Coach of the YearFrank Girardi, Lycoming College The standard for great coaches, Vince Lombardi once said, is consistency. It is one thing to have a great season, he said, but it is another to be great for a generation. "To have (players) come and go and still maintain that level of excellence is the biggest challenge for a coach," said Lombardi, who built the Great Bay Packers dynasty of the 1960s. "You have to be consistent in your approach, even though every season is different. You have to find a way to make all the pieces fit."


Frank Girardi has made the pieces fit for 27 seasons at Lycoming College in Williamsport, Pennsylvania. He is the first recipient of the Maxwell Football Club's Tri-State Coach of the Year Award, an honor to be presented annually to the area's outstanding college or high school coach.

Girardi has built the Lycoming into a national Division III power. His career record at the school is 202-65-5, a winning percentage of .752. Under his leadership, the Warriors have won 11 Middle Atlantic Conference championships and reached the NCAA Division III playoffs nine times.

In 1998, Girardi's team was 10-1 and finished first in the Middle Atlantic Conference Freedom League. The Warriors won the overall conference title and earned a fourth consecutive bid to the NCAA tournament. They qualified for the Amos Alonzo Stagg Bowl, the national championship game, in 1990 and 1997.

Consistency -- Lombardi's definition of great coaching -- is the hallmark of Girardi's program. He has led Lycoming to 24 consecutive winning seasons. He has won 195 games, lost 47 and tied five in that time for an .800 winning percentage. His teams have lost two or fewer games in 18 of those 24 seasons.

Girardi was a star running back at Williamsport High School and West Chester University, where he earned a bachelor of science degree in education. He broke into coaching in 1961 as an assistant coach at Jersey Shore High School. He was named head coach in 1963 and served in that capacity for six seasons.

Girardi went to Lycoming as an assistant coach in 1969 and three years later, he was promoted to head coach. The Warriors have been on a winning track ever since.
Since 1984, Girardi also has served as Lycoming's Director of Athletics. He oversees the school's 19 intercollegiate programs in addition to coaching the football team. He expanded the sports program, adding women's soccer five years ago and adding men's and women's lacrosse in 1997.

Girardi's wife, Lynne, teaches in the Williamsport Area school system. Their daughter, Justine, graduated from Lycoming in 1966. Three other children -- Cathy, Jerry and Frank, Jr, -- also graduated from the college.