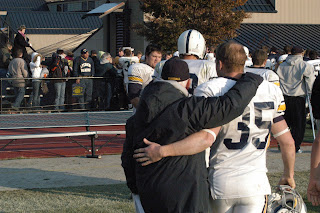 Lebanon Valley threw a 38-yard completion on its first play from scrimmage, setting up a 14-yard touchdown run by Charlie Parker in the game's first four minutes. Parker scored four touchdowns on the day, tying a school record. All three scores were followed by Brittany Ryan extra point conversions.

However, from the Flying Dutchmen 15 yard line, Hook was intercepted in the end zone by Tim Ridewood, ending the Lycoming threat. Hook was 10 of 22 on the day, but threw three costly interceptions in the first half.

Lycoming went three and out on its next possession and a 19-yard punt by sophomore Brad Shellenberger (Lock Haven, PA) gave LVC the ball in Warrior territory. But the blue and gold defense was stout, as it has been all year, and a tackle-for-loss by senior defensive end Ryan Yaple (Stillwater, PA) set up a third and long for the Dutchmen. Leb Val faked the punt, but Adam Brossman's pass fluttered incomplete and Lycoming took over the ball at its own 40.

Warrior running back Mark Rosa (Honesdale, PA) put together runs of nine and 14 yards, breaking tackles along the way. But an intentional grounding by Hook, 23 yards behind the line of scrimmage, resulted in a second down and 38 and ultimately another punt just before the end of the first quarter.

Yaple recorded his 14th sack of the year to get the ball back in Lycoming's hands. Yaple came into the game ranked first the Middle Atlantic Conference and second in the nation in quarterback sacks. He is sixth on the team in tackles, mainly because offenses try to avoid him.

Unfortunately, the Warriors couldn't get it started in the second period, as Hook's first pass skipped off the hands of Jimmie Stevenson (Pipersville, PA) and into the arms of Russell DeStefano, who thieved Hook twice on the afternoon.

A facemask call on return set up Leb Val at Lycoming's 19 yard line. A short burst by LVC's Parker made the score 14-0 with 11 minutes left in the half.
On the warriors ensuing possession, Rosa gained 10 yards on a draw but fumbled. Luckily Wagaman fell on the ball, preserving a beautiful 41-yard touchdown completion to senior tight end Bill Margetich (Glenolden, PA). Margetich caught the ball in the middle third and put a sweet move on the safety to waltz into the end zone. A Scott Erickson (New Providence, NJ) extra point put the Warriors within seven points.

However, Parker answered on LVCs next possession, exploding on a 40-yard tackle-breaking touchdown scamper that set the score at 21-7 at halftime. The Dutchmen attempted a field goal just before the break, but it was tipped by Wagaman and fell unsuccessfully.

Despite the lopsided score, total offense and time of possession was nearly even for both teams at the half. But turnovers spelled the difference with the Warriors totaling four mishaps in the first two periods. Leb Val received to start the second half, but the drive stalled. Unfortunately, a Hook completion on Lycoming's next possession was fumbled by senior Ryan Dixon (Dalton, PA), setting up a Dutchmen drive which culminated with Parker in the end zone again.

Warrior running back Josh Kleinfelter (Bellwood, PA) took matters into his own hands on the next possession. The freshman ran the ball nine times, getting as far as Lebanon Valley's four yard line. The third quarter ended with Lyco threatening, but a fourth down pass into traffic fell incomplete and the Dutchmen took over on downs.

Kleinfelter gained 116 yards on the day, while Rosa racked up 49. The Warriors totaled 197 rushing yards, but suffered futility through the air. Sophomore Colin Dwyer (Dalton, PA) took over at quarterback in the fourth quarter and immediately executed a 46-yard drive that saw Margetich catch his second touchdown reception.

With the score 28-14 and 8:31 still on the clock, Lycoming had to act fast. But the Warriors run-oriented offense, could not ride the momentum to another score. At 3:17, Dwyer took Lyco near midfield from deep in its own territory, but the Warriors turned the ball over on downs and their season ended.
It was a disappointing finale for the seniors, but hope springs eternal for the many first and second year players who gained experience in 2007. Lycoming's coaching staff is given the challenge of righting the ship this offseason and filling the holes left by graduation. Stay tuned.
Posted by JGREEN45 at 1:50 PM