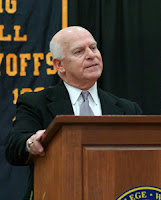 Girardi ranked fifth in wins among active NCAA coaches and second among active NCAA Division III coaches. He led Lycoming to 13 Middle Atlantic Conference championships and 11 appearances in the NCAA playoffs, including trips to the Stagg Bowl—the NCAA Division III national championship game—in 1990 and 1997. In all, the Warriors have tallied a winning record in 29 of Girardi’s 36 seasons.


Perhaps Girardi’s finest coaching moment came in the final game of the 2005 season when he became only the 17th coach in NCAA history to reach the milestone of 250 victories. The 17-10 overtime victory against longtime rival Susquehanna University capped an exciting campaign in which the Warriors rallied from a 1-4 start to finish with a five-game winning streak and a 6-4 record.


"Coach G, as most of his players call him, is a legendary figure,” said Lycoming President Dr. James E. Douthat. “He has etched a nationally-respected, winning tradition in the town where he was raised. In the world of NCAA Division III football, the name Frank Girardi is synonymous with class and success, both on and off of the football field.”


Girardi is a member of the West Branch Valley Hall of Fame, the Pennsylvania State Sports Hall of Fame and West Chester University’s W. Glenn Killinger Football Hall of Fame. The Middle Atlantic Conference has honored Girardi as its Coach of the Year on 12 occasions. In 1999, he became the Robert W. Maxwell Football Club’s first recipient of their Tri-State Coach of the Year Award, which is presented to an outstanding college or high school coach from Pennsylvania, New Jersey or Delaware.


Girardi began his football career in high school when he carried the ball as a running back for the Williamsport Millionaires. He continued to play at the collegiate level at West Chester University.


Girardi entered the coaching ranks in 1961 when he became an assistant coach at Jersey Shore (Pa.) High School. He became head coach of the team in 1963 and remained in that position for six years.


In 1969, Girardi became an assistant at Lycoming under Budd Whitehill. Three years later, he took over the reigns as head coach of a Warrior program that had gone 14-34 since its last winning season in 1965. During Girardi’s first three seasons, Lycoming went 2-6, 2-6 and 3-6. In his fourth season, the Warriors recorded a mark of 6-2 and went on to have 29 consecutive winning campaigns.


Girardi resides in Williamsport with his wife Lynne. Their four children – Cathi, Jerry, Frank, Jr. and Justine – have all graduated from Lycoming College.
Posted by JGREEN45 at 3:00 PM

One of the greatest men that any team could be lead by....